Transforming the Classroom to Bring Collaborative Learning to Illinois Schools

The schools of Kildeer Countryside School District 96 in southern Lake County, Illinois have already been recognized for their academic excellence by the U.S. Department of Education and the Illinois State Board of Education, and the district recently applied to be an Apple Distinguished District. But district administrators recognized that significant changes needed to be made to their classrooms, and better technology needed to be acquired, in order to help their students acquire the new skills mandated by today’s educational standards: effective communication and collaboration. To that end, the district has turned its attention to redesigning classrooms to fit the learning needs of 21st century students.

Approx. 600 students in each middle school

7.4% of student population is low-income

69.5% of the teachers hold master’s degree or higher

In 2013, District 96 began phasing in a 1:1 iPad program at Woodlawn Middle School and Twin Groves Middle School. “What we noticed was that traditional classrooms really weren’t providing the environment and flexibility needed for success with integrating 1:1 technology,” said Kevin Ryan, 21st century learning director in District 96. “Whether we set desks up in traditional rows or arranged them in mini-pods, it was difficult for kids to maneuver, share information, and collaborate with each other.”

“As we decided what to do with the classrooms, we were evaluating all of our options,” said Ryan. District 96 had previously worked with Fathom Media, a reseller whose specialty is serving as audiovisual integrator and partner. Drawing on its vast industry network and expertise, Fathom Media presented Mimio as the best option for what the district was trying to accomplish. “We came to see that Mimio was the way to go for what we wanted right now,” said Ryan. 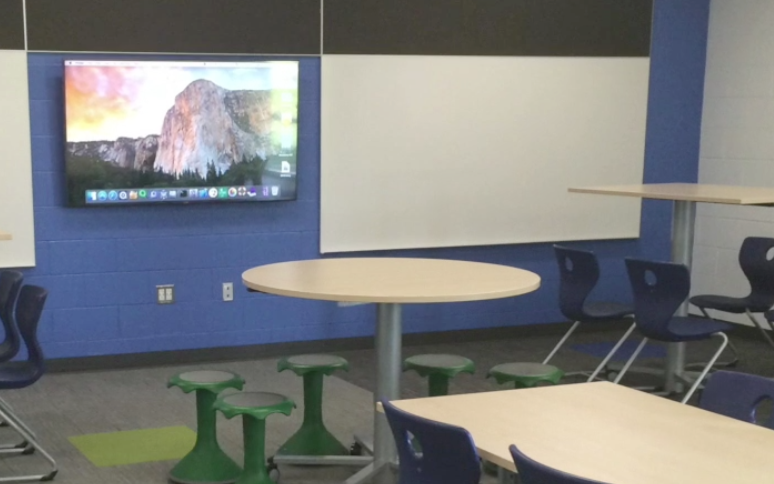 District 96 chose to replace the interactive projectors the classrooms had been using with MimioProjector™ touch projectors, which turn conventional dry erase boards into touch boards.

“We felt that the original projectors we used didn’t have the image quality and size that were conducive to what we wanted,” Ryan explained. “The Mimio image just seemed to be much clearer.” Ryan also cited the appeal of the device’s warranty, as well as its ease of use and interactivity. “It’s really like plug and play,” he said. “You can use your hand, and you can have up to 10 touches at once. So you can have more than one student interact with the board at any given time, which is really one of the coolest features about it.”

Mimio Impresses with a Helping Hand

Ryan also recalls a point in the MimioProjector installation that left a strong impression. The schools had used the included adhesives to attach the devices to the walls. “We were having a very humid summer and the devices were just sliding down the walls from the humidity,” recalled Ryan. “That set us back. For a week we were kind of struggling.”

They contacted Fathom Media, who got Mimio directly involved; Mimio representatives came together with Fathom Media staff members, working as a team to address the issue. Their support people saw immediately that the adhesives were not flush to the board and were creating interference with the infrared devices. Mimio suggested that those IR components be screwed directly into the whiteboard to create a stable, flat mounting surface conducive to precise calibration.

Ryan was especially appreciative of the fact that the Mimio representatives came to the buildings to provide support. “They gave us suggestions online, but they also physically came to the buildings and spent a few hours troubleshooting with us to make sure any problems were corrected,” he said.

“So, if kids were presenting to the whole class or if the teacher wanted to demonstrate something, a student could be sitting or standing anywhere in the room and have a great view.”

In Woodlawn’s newly-configured classrooms, two walls bear 65-inch televisions in addition to the MimioProjector touch projector on a third wall. Each of these devices is connected to an Apple TV.

“The classrooms are set up so that there is really no front-of-the-classroom,” explained Ryan. “If a smaller group is working on a project collaboratively, they can move their workspace around because the tables are on wheels. So they can slide closer to either the MimioProjector or one of the televisions. Then they can send what’s on their iPad to the television through the Apple TV, and share it with the class.

Ryan continued, “At any given time, there can be three different images: one image on the MimioProjector and different ones on the two televisions. Or the teacher can have the same image playing on all three. So, if kids were presenting to the whole class or if the teacher wanted to demonstrate something, a student could be sitting or standing anywhere in the room and have a great view.”

“We train [the teachers] on different strategies to create a learning environment that’s collaborative, making sure every student has a say. There’s no way a kid can hide in our classrooms.”

Ryan reports that the teachers have seen an increase in student engagement in the new classrooms. “We’ve also seen that the teachers can now differentiate at a greater level with students, and are better able to meet each and every student’s needs with the technology,” he said. “Since we created these classrooms, teachers have really made a huge shift in their instructional practice,” continued Ryan. “We train them on different strategies to help them create a learning environment that’s really collaborative and make sure that every student has a say. There’s no way a kid can hide in our classrooms.”

District educators have reported to Ryan that the new classrooms facilitate compliance with the Common Core standards, allowing teachers to delve deep into those standards. “We’re able to make sure thatstudents achieve the deep understanding that the standards require, especially when some of those standards include communication and collaboration,” he said.

Parents have also embraced the classrooms’ new setup, particularly when they see it for themselves on Curriculum Nights or Open House Nights.

“We’re phasing in the new classrooms,” said Ryan. “But after the first year, the parents were already asking, ‘Can’t we do this with every classroom? My kid goes from this amazing learning environment to the next classroom, where there’s a more traditional setting and things are clunky and they don’t have these displays and they don’t have interactivity.’ So the parents actually want us to move more quickly with the renovations.”

Come and see us at
ISTE