In late 2015, the Woodhaven-Brownstown School District in Michigan passed a bond of almost $55 million for building renovations. While the bond was primarily for its secondary school, the district decided to include Yake Elementary, which for years had been without the funds to update classroom technology.

Yake’s media specialist, Joe Heacox, was part of the team that evaluated potential purchases; the technology they decided on was Boxlight’s ProColor 75” interactive flat panel displays. The team determined, and school leaders agreed, that the displays’ cost and longevity made them the best choice. During the summer of 2017, Yake installed the ProColor displays in every classroom as well as in Heacox’s computer lab. “Even our music, our art, and our resource classrooms have one. And they’re using it!” said Yake principal Tim Podlewski “I’ve worked at this building for 13 years, and I’ve never seen our kindergarten teachers use a projector of any kind, and that includes the old-style overheads,” said Heacox. But when the school got the panel displays, he saw those teachers using them on a daily basis. “For the first couple of weeks, I thought, ‘Yeah, it’s a fad.’ But it just stuck. They’re actually doing this every day!” he said. “It is pretty fantastic. It takes their instructional impact up to a new level.”

Yake uses the Journeys reading curriculum and Math Expressions from Houghton-Mifflin. “Both of those series have many lesson plan enhancements that are designed for interactive boards. We’ve never been able to use those enhancements until this year,” Podlewski said.

Heacox, in particular, has made copious use of his panel display, especially for modeling. “I model everything,” he said. “And now I don’t have to sit at my computer to do the model, I can do it right at the panel display, so they’re actually seeing me. When you’re sitting, you’re kind of off to the side; they are between five and 10 years old, so off to the side doesn’t quite get their attention.” 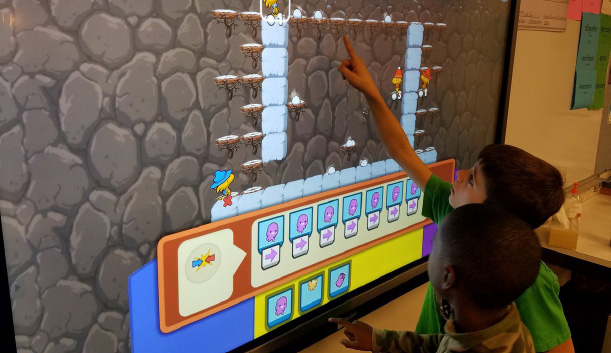 One instructional example that Heacox shared is his use of the ProColor panel display when showing second through fifth graders how to work on Google Docs, Google Sheets, and Google Slides. “I’ll do an initial annotation and then I’ll ask questions throughout. And the ProColor is also really great for doing the slideshows, showing them how to use all the tools, and doing the animation,” he said. “If I just want to preserve something, I just go into sleep mode. I can even save it on the board. I really like that, being able to save something and go back to it two days later or the next time we revisit that topic.”

Additionally, Heacox has students come up and work on the display’s interactive touch screen so he can check their understanding, such as locating a keyboard’s italicize button or demonstrating how to center the cursor in the middle of a page to make a title. And all his students are ready and willing to do any activity on the panel display—at times, he goes right down the rows of students, so each of them has a chance to come up to the display and demonstrate a task. “So they kind of take learning into their own hands,” he said. “They own it. And if they own their learning, they’re more likely to get something out of it.”

“And now I don’t have to sit at my computer to do the model, I can do it right at the panel display, so they’re actually seeing me.”

He also lets one of the students use the display whenever they work on an online reading program called Raz-Kids. “When we’re working on our reading, one student will always want to be on the Boxlight because it’s giant, and it’s great, and they love it,” he said. Plus, he and the students enjoy the display’s timer feature, which lets the students know how much time they have left for a particular task or activity. Previously, Heacox’s computer lab had a ceiling projector, but no interactive screens. “I would have to take a screenshot, put it in a Google Slide, annotate on the Google Slide, have to save that again, and then re-project it,” he said. “Now I just pop the Boxlight on. I can freeze it, annotate it, leave it there, walk around, help the kids, come back, and annotate on the fly.”

One of the main things Heacox likes about the ProColor interactive flat panel display is the ease of use. “When I bring up a document and work on it with the kids, I’m not fumbling around. I just open up my screen, and it’s up there,” he said. He also appreciates the ultra-high definition (4K UHD) display’s brightness and clarity. “It’s probably 95 percent clearer than my projector was,” he said. “It gets their attention.” “Not to simplify the technology, but it’s a giant tablet, and that is the world these kids live in,” added Podlewski. “And they’re not scrambling to find pens, they’re not trying to readjust the board, we’re not worrying about burned-out light bulbs. The kids just light up anytime they get a chance to use the boards or work at the boards. I’ve seen SMART boards, Promethean boards, the short throws and all, but hands down, this has been the most user-friendly, most kid-friendly resource we’ve ever had access to.”

“…hands down, this has been the most user-friendly, most kid-friendly resource we’ve ever had access to.”

As of this writing, it’s too soon for Podlewski to point to any difference in Yake students’ scores on learning assessments. “We use the STAR assessment through Renaissance Learning. When we pull that data in January, we’ll have a better sense,” he explained. But he has definitely seen an increase in student engagement. “When I walk through the classes, which I try to do as much as I can, I see the kids hovering around the board quite frequently.” Since the school has been using the displays for less than a year, Podlewski knows they have just scratched the surface of what’s possible. He and his teachers are now planning to incorporate the displays into their center rotations practice. They have also discussed using the MimioMobile app to enable students to do activities on tablets and smartphones while showing that work on the display. “How nice would that be as a next step?” he said.

Come and see us at
ISTE