On August 21, Regina Ahmann, a science teacher at East Coweta High in Coweta County, Georgia, held a solar eclipse-viewing event with her zoology students. She was able to add an inquiry-based learning element on the spur of the moment through the use of Boxlight’s Labdisc portable STEM lab.

That morning, a co-worker commented that it would be nice to collect temperature changes and other data about the phenomenon. Ahmann thought of the Labdiscs that the school had procured through their vendor partner, PowerUp EDU. She placed the devices in different locations around the school at about 11:30 a.m., including in the grass right outside her classroom. “We just set it up to take temperature, humidity, and light data every minute until I went and turned it off,” she said. The 28 juniors and seniors assembled on the school’s football field at 2:30 p.m. when the moon had fully covered the sun’s disk. Before they went outside, the class talked about what they thought would happen to the three variables.

Real-Time Data to Learn From

When the eclipse was over, Ahmann waited until the end of the school day to collect the Labdiscs to ensure that she obtained additional data. The next day, the class downloaded the data, used the accompanying Labdisc software to generate graphs, and discussed the findings. 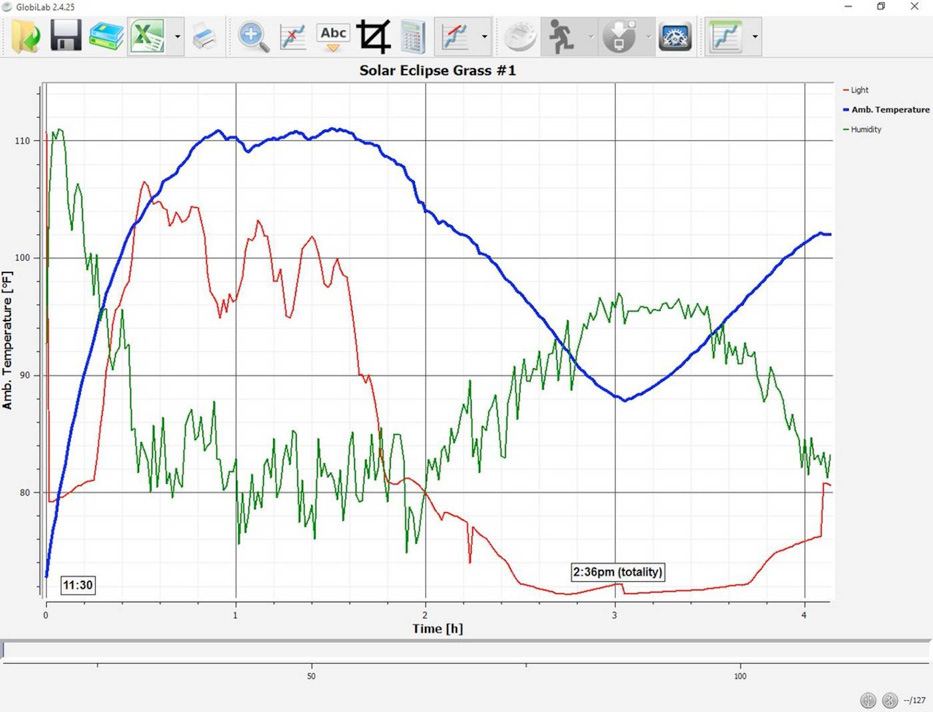 According to their data, the recorded temperature at the beginning of the eclipse was 111ºF, which decreased to only 88ºF when the moon completely blocked the sun’s disk. The temperature began a steady climb almost immediately after reaching that low as the moon continued on its path. The device also recorded an initial illuminance of 6,984 lx, which decreased to only 19 lx before increasing back to 1,889 lx when the eclipse concluded. However, relative humidity readings went from 51% to 77% at full eclipse, and then receded to 55%.

That third finding helped Ahmann herself refine her own knowledge base; after suffering through many sweltering Georgia summers, she’d come to automatically associate hot weather with high humidity. “This actually realigned a science misconception for me,” she said. “It has to do with the air temperature and how much water the air can physically hold because of the temperature. And that’s actually inverse. When it’s cooler, the air can hold less water vapor so the relative humidity goes up. If a kid had found that while we were collecting humidity data, I would have said ‘You did your experiment wrong’ or ‘Your method was wrong.’ But now I have this Labdisc and so I’m like ‘Huh... I’m wrong.’”

“ I tweeted out a screen capture of Regina’s data, and I got 20 teachers saying ‘How do I do that?’,” he said. “I know that if I can get the teachers engaged in this kind of activity, I’m improving the lives and education of the students. That is invaluable.”

According to Dr. Donald White, the science content specialist for Coweta County Schools District, the benefits of the activity have reached even further. “I tweeted out a screen capture of Regina’s data, and I got 20 teachers saying ‘How do I do that?’,” he said. “I know that if I can get the teachers engaged in this kind of activity, I’m improving the lives and education of the students. That is invaluable.”

Technology used
in this installation